This weekend we learned quite a lot about the upcoming Anime series Full Metal Panic! Invisible Victory. The FMP creators Shoji Gatoh and Shikidouji went to Los Angeles Anime Expo 2017 to talk about their upcoming project. Previously there were rumors about a delay to the show which got officially announced back in October 2015. But first things first.

On Friday June 30th the panel was held at AX 2017. Professional sources from AnimeNewsNetwork and Crunchyroll covered the event which was hosted by Funimation, the US publisher of Full Metal Panic. They were talking about the project, showing unfinished footage from the Anime and having a Q and A. Videos from the panel can be found at Otakupress.pe. It was announced that Invisible Victory will be delayed by half a year to ensure a better production quality and now start airing in the Spring season starting April 2018. Everything looked good. Most of us were satisfied. Then all hell broke loose when the actual trailer got leaked a few hours later.


Keep in mind that this is unfinish footage from an Anime not to be released for another 9 months. But my thoughts? Yeah it looks fantastic. I dig the character design. I like how it resembles TSR. At first i wasn't even sure if i was seeing old TSR footage or IV. I'm flat out stoked. Check for yourself:

We also got some nice shots for the main cast. I'm rather happy that they stuck with the more classic character designs and didn't modernize it too much like we've previously seen.

We also got a good view at some of the main villains. I like how they stuck to the Leon The Professional design of villain Kuruma (on the right).

So all this is great. But there's more. The same guy who uploaded the trailer posted some concept art currently on display at AX. The caption says that the three Behemoth will appear in episode 2-4 of the new Anime.

This is actually some super inportant information because it confirms two things:

Correct me if i'm wrong but I don't recall the three Behemoth having different colors in the COMO light novel. It seems like a good idea though given how huge the fight is. Although it says episode 2-4 it can be assumed that it only means for these three designs. As we know the Behemoth are also part to the Come Make My Day and Always Stand Be Me story arc for which there are probably gonna be new designs and colors.


We also learned from panel visitors that in a second promotional video (which has not been leaked yet) footage from Namsak was shown. This confirms that the Nami arc (BOMF) will be part of the Anime and not be cut. Another person on 4chans /a/ board pointed out that the dates on some of the promotional material were dating back as far as mid to late 2016. Meaning they've been working on this show for quite a while now. Studio XEBEC seems to focus a good amount of attention of the mecha design which can be seen by upgrades made to the ARX-7 like the eyes.

It's worth pointing out that all Anime footage from the PV is likely from the first episode alone. And likely will it get some more improvements until release nine months from now. But i'm already happy as is. There's a good chance that FMP will get a happy end like this.


Btw when watching the Trailer you may notice some strange translations. Don't mind them too much. The Trailer was not meant to be released to the public and has likely been translated in haste by some japanese interns. When handling the US localization Funimation will have an eye on this to keep continuity. That's all for now. See you next time. 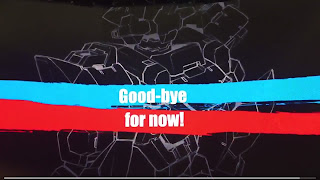